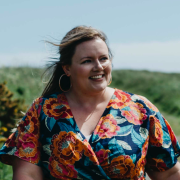 Goal 5: Take a bit of pride in myself
Daily Habit: Allow 2 days max per week for slob clothes
Because: This one relates to the goal of looking after myself. I work from home 4 days a week and as we all know from lockdown, the first thing to go is the make up and the jewellery and the non elasticated waistbands. For some, maybe that’s a great thing, but for me, not so much. There is still definitely a place for the slob clothes in my week (even after lockdown), but I’m going to restrict it to 2 days max. There’s a lot out there about positive affirmations and self love and that’s definitely easier when I can catch my colourful dress or fun earrings in the mirror than when I’m wearing paint stained joggers and my hair’s in a Ms Trunchbull bun.

This one’s still going strong. My 2 slob days are very much enjoyed and then I get to rummage in my wardrobe the other days. With it being so sunny I heaved my suitcase down from the attic and unleashed the summer clothes. Its like I get lots of new clothes and I love the memories that come out with them; perving on peacocks in Lisbon with my friends, strolling along the Tenerife coast with my Granny and sister, BBQing at our godson’s first birthday. Anyone else do that? Put their seasonal clothes away to give more space for everything? Not all of us can have Kardashian sized walk ins!

If I was a season, I’d be summer; all my favourite colours are out, everything’s floatier, I can wear sandals ALL THE TIME, the brightest flowers are blooming and I can get my garden tan on. Isn’t summer such a friendly season too? Usually it would be all BBQs and beer gardens and holidays and sandcastles. I feel like I’m about to break in to Olaf’s song.

Its the season I excel in, I know what I want to wear, I can flounce along the beach in it, I’m less make-upped on account of the tan (although this year I’m getting freckles, I’ve never had so many before!) I just think I’m more me in summer, its probably a little bit why I’d been feeling so meh through the autumn/winter! All my favourite Mediterranean food and fruit and salads and all the picnic picky bits are also so much tastier and its much easier to be healthy I think (if I don’t stuff too many scotch eggs and sausage rolls in my gob.) I sometimes think I should be living in a hotter country where its summer all year round but I don’t think I’d appreciate it as much.

What season are you? Do you have a favourite?

I didn’t even mention reading; is there anything better than the sunshine, a picnic, a fruity drink and a good book?

I like so many kinds of book but in lockdown I’m not loving the psychological thrillers and whodunits and mystery ones that seem to be everywhere at the moment. I’ve been looking for the escapism and uplifting ones and I’ve sort of gone back to the fashion fiction books that are usually romcommy, silly and a bit more of what I need right now. I’ve always loved reading and watching fashion related stories and I’ve watched a few bad films purely for the fashion content (‘A Simple Favour’ anyone?)
So here’s what’s scratching that itch for me (I’ve linked the books but you may need to Google the rest):

Covet – Another of my secret guilty pleasures…its an app and a bit like a game version of ‘Pose’ – they give you the category and the requirements, you make the outfit. The clothes are 90% real designer’s clothes they’ve recreated in the app. If you love the clothes you can shop it too (I’m not rich enough for that) but its fun if you’re bored. Also, if you get it, let me know ‘cause we can share wardrobes haha.

You’ll notice in my list of films / tv I’ve not included the documentary style ones; The September Issue, The First Monday in May, Bill Cunningham and aaaaall the stories about the designers; Coco Before Chanel etc because there’s too many, I don’t always enjoy them and they’re really searchable. If you like a big designer, there’s probably a documentary / film bio on them.

Any that I’ve missed or that I need to watch? Let me know, I’m sure I’m missed a few.

Please note the links in this post may become affiliate.